The Romantic Road: Germany's most famous and oldest holiday road

Beautiful landscape paintings, historic half-timbered houses, magnificent castles and royal castles. On the approximately 400 km long "Romantic Road", there are many impressive sights. It leads from Würzburg in the north to Füssen in the south. Bus tours along the route are popular with many Japanese tourists. The Germans prefer to explore the area by car, mobile home or quite classically, along the cycle route, by bike. The entire holiday route is marked for cars with brown signs and for cyclists with small signposts, so that one does not stray from the path. The journey starts with art, culture and culinary delights!

Starting point of the holiday street is the university city Würzburg, The city on the Main shines with a variety of historic buildings. From the fortress Marienberg, you have a great view over the whole city. The UNESCO World Heritage Site, the residence, is located just a short distance from the city center. In the city you can stay in the marketplace or drink a glass of Franconian wine on the old Main Bridge in a great setting. Speaking of wine – the landscape around Würzburg is characterized by huge wine fields. This is the perfect place for a tour of the vineyards or a wine tasting. Maybe you elicit the winegrower a secret about the delicious Franconian wine.

Würzburg – The city on the Main

The path leads to the "lovely Tauber Valley". Past Tauberbischofsheim, with the Türmersturm and Bad Mergentheim, with its landmark the Renaissance Town Hall, the street leads to Rothenburg ob der Tauber, The medieval city is probably one of the best known on the Romantic Road. Slender turrets and imposing Wehranlangen, winding lanes with picturesque bay windows, fascinating half-timbered houses and mighty churches – all that the historic old town of Rothenburg offers its visitors. Our tip: Try the typical snowballs here. These are balls made of shortcrust pastry which are rolled into cinnamon sugar or icing sugar after frying. Very tasty for coffee or tea.

Heading south is the next stop Feuchtwangen, The visit of the cloister games can not be avoided here. In funny, serious or crazy theater productions, you dive into other worlds. And not all in a theater hall but in the open air!

A highlight of the journey is the small town dinosaur, Center of the city is the market square with the cathedral St. George. The old town is dominated by beautiful, colorful half-timbered houses, which are surrounded by a city wall with towers and four large gates. It is one of the best preserved medieval cities in Germany. This city was not voted the "most beautiful old part of Germany" by the magazine FOCUS for nothing. Our tip: Visit Dinkelsbühl in July for the home festival of the "Kinderzeche"! Dinkelsbühl travels back in time at this festival. The city's inhabitants play a legend every year for the children's cattle, after which a girl saved the city from the Swedes in the 30-year war. The city blossoms with flags, colorful costumes and historical dance performances – a real insider tip! 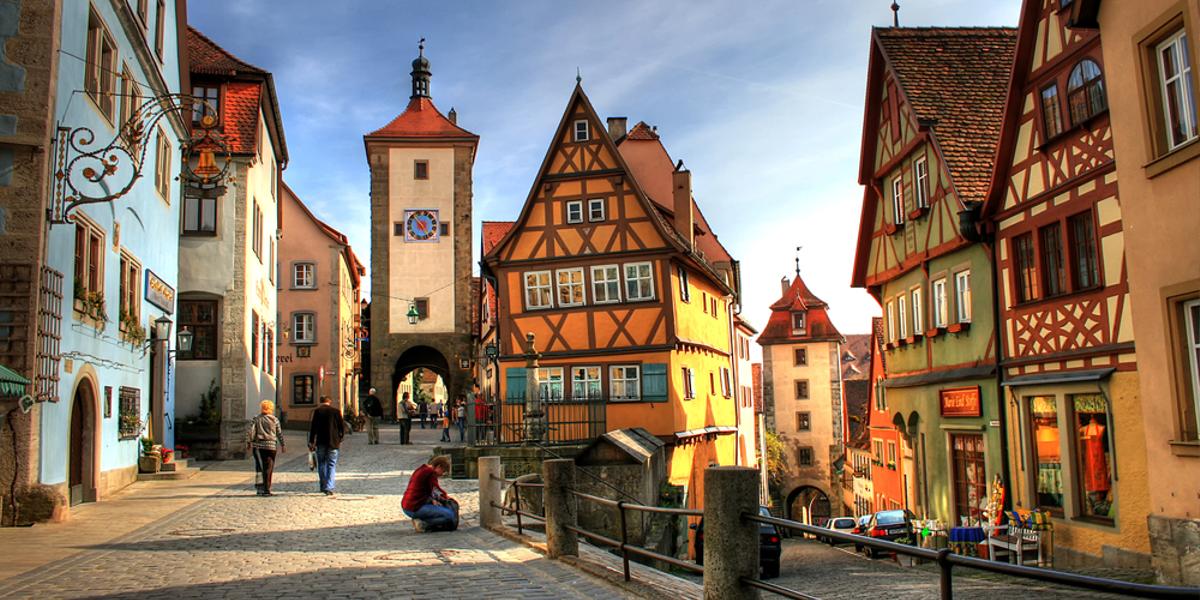 The road continues into the Ries, which was created by a meteorite impact. There is also the medieval city nördlingen, The completely preserved, walkable city wall invites you for a walk. From the church tower "Daniel", the center of the city, you have a wonderful view over the circular old town and the Ries. You can even listen to the Watcher's Call of the Tower, who calls his saying "So, G'sell, so" from the tower every night.

The journey over the holiday road leads over Harburg and Donauwörth in the Fuggerstadt augsburg, The Augsburg City Hall, the Golden Hall and the Fuggerei. These are three historical treasures that you should not miss in the city. For example, the Fuggerei is still the oldest 16th-century social settlement in the world today. It goes back to a foundation of the famous merchant Jakob Fugger, who donated these guiltless impoverished Augsburg citizens. With a church, a city wall and three gates, it is called a "city in the city".

Landsberg am Lech is located about 40 km south of Augsburg and is also part of the Romantic Road. The heart of the old town is the wide market square with the Schmalzturm, the town houses and the beautiful stuccoed town hall.

On Schongau The next cities are over Schwangau and feet! Having arrived in the mountains, the Allgäu is the perfect way to end your trip! Of course, the absolute highlight is Neuschwanstein Castle, which attracts countless visitors every year. Here you can leave the journey in a fairytale way.

The fairy tale castle Neuschwanstein is known far beyond the country's borders.

Enjoy the romantic cities and experience a varied holiday on the oldest holiday route in Germany!

Here are the offers in Bavaria.

Here are some more tips for holidays in Germany.