My insider tips for San Francisco

For me it was finally back to San Fancisco in August. Two years ago, I worked there as an au pair and I decided to come back. After all, there is still much to discover. I take you on my journey and to my favorite places.

From Munich, Turkish Airlines went first to Istanbul and on to San Francisco. I was a bit queasy before the next (almost) 13 hours, but the onboard program and the food of the airline left nothing to be desired. Completely exhausted, I eventually stood before the nice official of the US immigration and after a short "Welcome back home" I had again American soil under my feet. I was picked up by friends, who drove me to my old host family, where I fell into bed very early and exhausted.

The first few days I spent with family and friends but then finally was the long-awaited visit to my favorite city on the program. With the subway it went to Downtown San Franciscowhere I got off at Powell Street. From there you can reach most major attractions either on foot or by bus.

The bus and BART (subway) network in San Francisco brings you at good prices actually everywhere. Anyone who likes to run something, I really recommend to see as much as possible in this way. You get a very special insight into the city, discover something new at every corner and keep fit thanks to the many mountains!

I decided that first Union Square pay a visit. Here you can go shopping, theater and much more. So, almost everything happens in the area! So I started with a little shopping tour, which unfortunately did not stay as small as expected. Since the road to the Ferry Building was not very far, and the weather was beautiful, I decided to walk there without further ado. In one moment you are surrounded by high houses and many people and in the other you are already on the water. That's one of the things that I love about San Francisco. 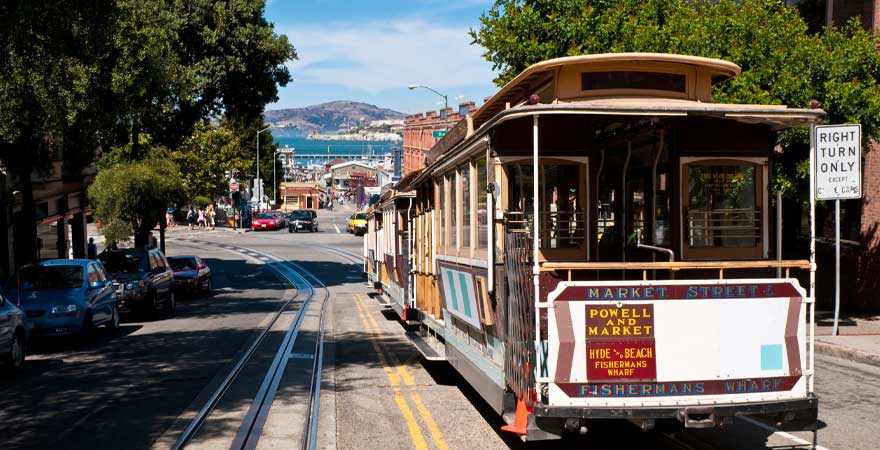 After a short ride on an old tram, which costs only $ 2 and is almost as beautiful as the cable cars, I arrived at the tourist point of the city: the Pier 39,
There is always something going on here and it is teeming with tourists. However, you can of course also the most important things (if only from afar) from here: Alcatraz and the Golden Gate Bridge. Thanks to the sun, the bridge was not foggy and Alcatraz could be seen very well. 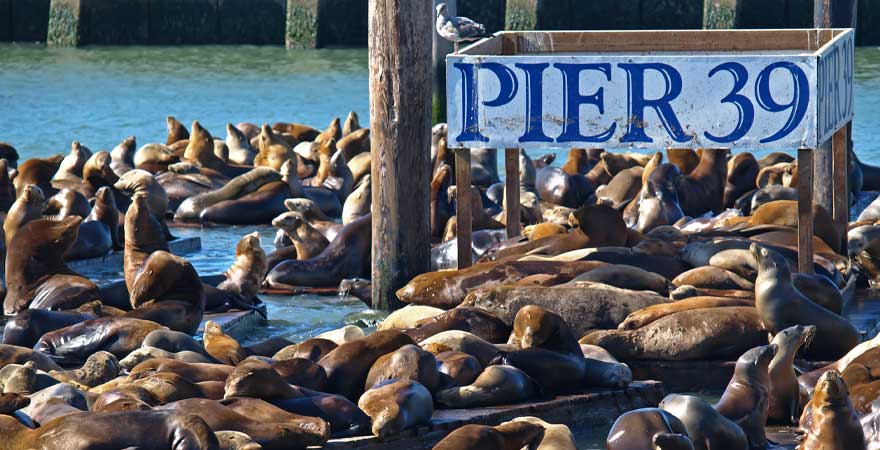 I also paid a visit to the stinking sea lions. As hunger slowly started, I could choose between seafood or various fast food chains. Highly recommended is the famous San Francisco Clam Chwoder. This mussel soup is served in a bread and tastes really delicious! But I wanted to pay a visit to my favorite Burger store in the US and so there was Cheesburger and Pommes at In 'n' Out Burger. The prices and the fresh ingredients convince there simply! For the first day I had chopped off everything on my list and was able to go home.

Let's get to my favorite spot: A small road that can be reached either from Orinda or from Berkeley leads up a mountain to the "Grizzly Peak", Probably the most beautiful vantage point in the area and well attended at any time of day or night. That's why parking up there is always a bit adventurous, but once you've found a place, you can let your eyes wander over Oakland, Berkeley and San Francisco. With a little luck, you might even see the Golden Gate Bridge. It took me there three times during my vacation.

If you have the opportunity, you can get to know Berkeley on a short walk or visit the University Campus of Berkeley University. Especially for football games of the California Golden Bears worth the extra! 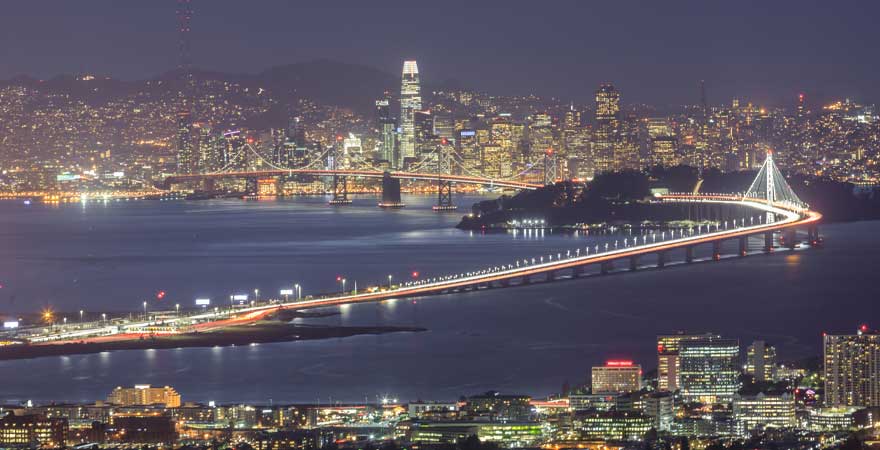 China Town and the busiest street in the world

The days after it was a second time in "the city", as they like to be called only. This time with friends who were visiting and wanted to explore the area. Our reserves were first filled with a coffee. After that we are heading China Town Run, one of the largest Chinatowns outside Asia. You can buy great souvenirs here that are not overpriced for a long time as at Pier 39. Generally there are many crazy shops there.

For us it then went on foot to Lombard Street. Fortunately, the weather was really good with us. The way to Lombard Street is exhausting enough even without heat – it feels only uphill. The steepest part of the road is also one of the "winding roads" in the world. Many tourists drive there by car, but I think you can enjoy the view and the road by foot much better.

By bus, which costs only $ 2 for two hours, we drove to Alamo Square. During my first 12 months in the US, I never made it there, so I was curious if the Painted ladies look just as beautiful as you know them from various TV series. I was a little disappointed in the end that the houses were nice, but not as nice as expected. Nevertheless, a visit is worthwhile, especially in the wetter season, when the park is still beautiful green.

Walk across the Golden Gate Bridge and take a ferry back

My last visit to San Francisco was a few days before my trip home with my best friend. We wanted to do something special and decided on the Golden Gate Bridge to run. The weather was perfect, for once the bridge did not hang in the fog and so it started at noon. Directly at the lookout point, there is a small snack, by being able to eat hot dog and Co. with a view of the bridge at moderate prices. That was a different lunch! 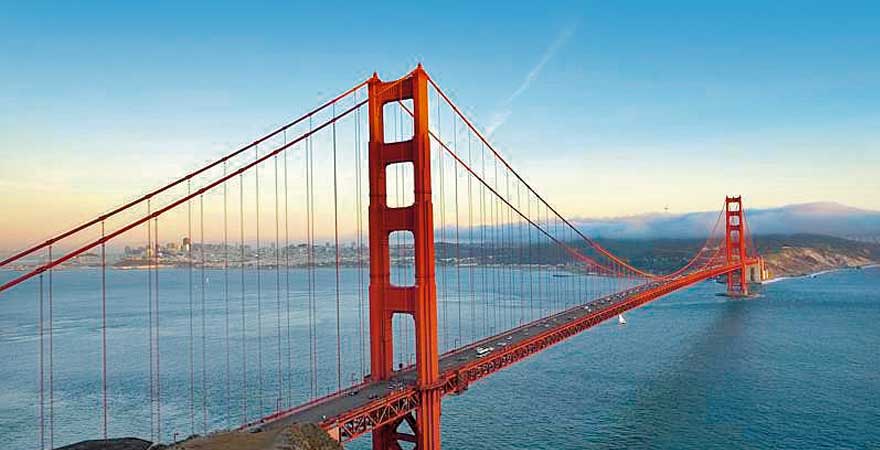 The three kilometers over the bridge are quite easy and enjoyable to walk, because you can enjoy the view and the view over the Bay Area. It was really something special to walk over the main landmark of the city.

Arrived on the other side, we drove to the next town, to Sausalito. This small town has many cafes, restaurants, and galleries. We had a drink and then bought a ticket for the next ferry. $ 11 may not be cheap, but it's worth it!

On the way home, we drove past the Golden Gate Bridge, took a look at Alcatraz and arrived at the beautiful Ferry Building in San Francisco. So I was able to say goodbye once again a special view of the "skyline" of the city.

Unfortunately, the two weeks passed way too fast and after 2 weeks I was already in the plane to Germany. But the pilot gave all passengers a wonderful moment. Shortly after our start in San Francisco, we first flew over the Golden Gate Bridge, San Francisco and then along the Bay Bridge via Oakland and Berkeley. Of course I could not do all the things I had planned for the second visit, so at least I have a reason for my third visit to the beautiful city!

If you fancy a city trip to San Francisco, you will find suitable offers for hotels and flights with us. But rather a different city? Here you will find holiday guides for New York and Miami. Enjoy browsing!