Morocco: Get to know the country and its people on excursions

If you are holidaying in Morocco, you should definitely take a few trips. The country is so fascinating that it would be a shame if you did not see it outside the hotel and the beach. And that's why we've put together some great tours for you. Here are a few examples of your holiday design on site.

From Agadir there are a number of excursions that we can recommend during your beach holiday:

Two days off in the desert

A desert trip is something very special. You are never closer to nature than to a night away from civilization. And from the original landscape you will get to see a lot for two days. It goes with the jeep from Agadir to the Sahara. Sand, sand and again sand it means for two days for you. But even in the largest desert, the next market is not far away. On the trip you will try saffron in Taliouine, visit the souk in Taroudant and have lunch and dinner in the oasis city Foum Zguid. From the jeep you change to the desert ship and can marvel at your surroundings from the back of the camel.

Naturally, an overnight stay in the desert is also planned – in the real nomad's tent. However, you should take the opportunity and pitch your camp under the stars. Because who sees the night sky in the desert, feels as if he had never seen the stars. The Milky Way sparkles and sparkles, shooting stars fly so fast and numerous that you can not keep up with the wishes and the moon slowly lulls you to sleep. An unforgettable sight, we guarantee you that. 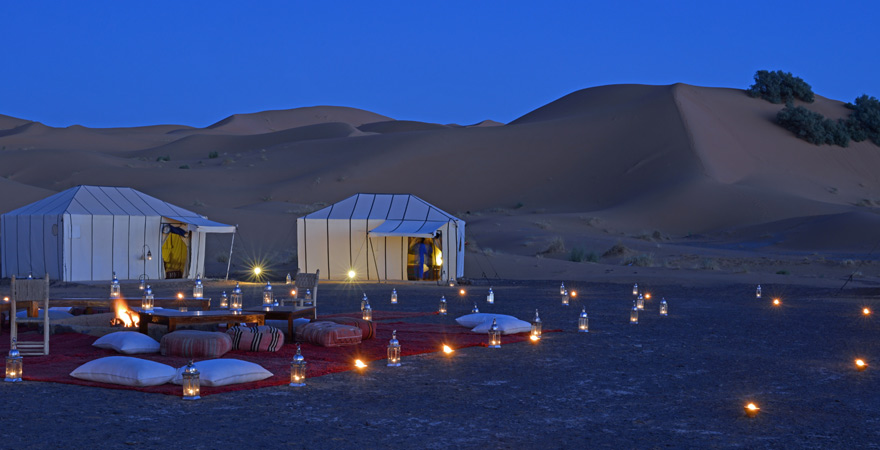 Marrakech and the High Atlas

For even more variety during your beach holiday in Agadir, a two-day excursion will take you to Marrakech 220 kilometers away. The "red city" can be reached by motorway in about three hours, so you can fully enjoy your arrival and departure. Arrived, you can not escape the oriental flair guaranteed.

On this two-day excursion you will see, among other things, the most important sights of this fascinating royal city like the Koutoubia Mosque and the Bahia Palace with its magnificent gardens, delicious Moroccan food and overnight accommodation in a traditional riad. Take this opportunity to savor Marrakech's exotic spices in the souks and let yourself be carried away by the bustle of others on the famous Jemaa el Fna juggler's square. 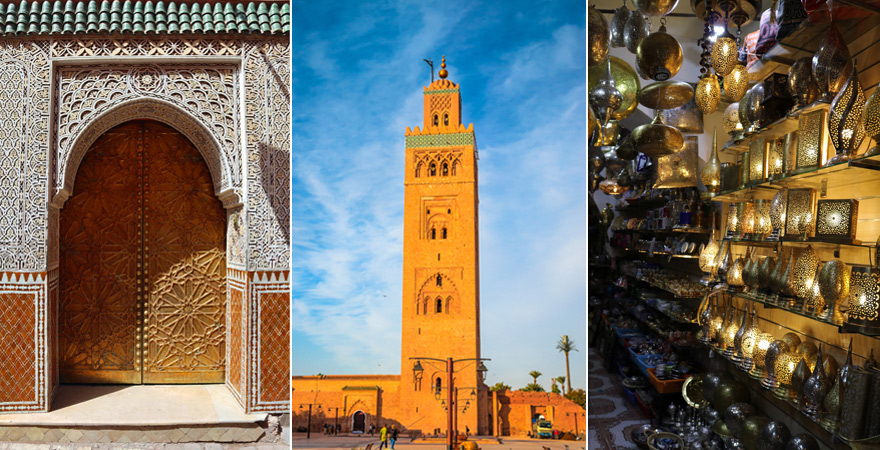 Incidentally, you can combine a trip to Marrakech with a trip to the High Atlas Mountains. This is then the next day. An absolute contrast to the bustling metropolis. The High Atlas is also not far away, so you have plenty of time to get to know the fertile Ourika Valley and the beautiful nature of the mountains. The best thing to do is not to look at it, because almost after each bend, the landscape changes and offers a new play of colors before returning to the motorway towards Agadir. 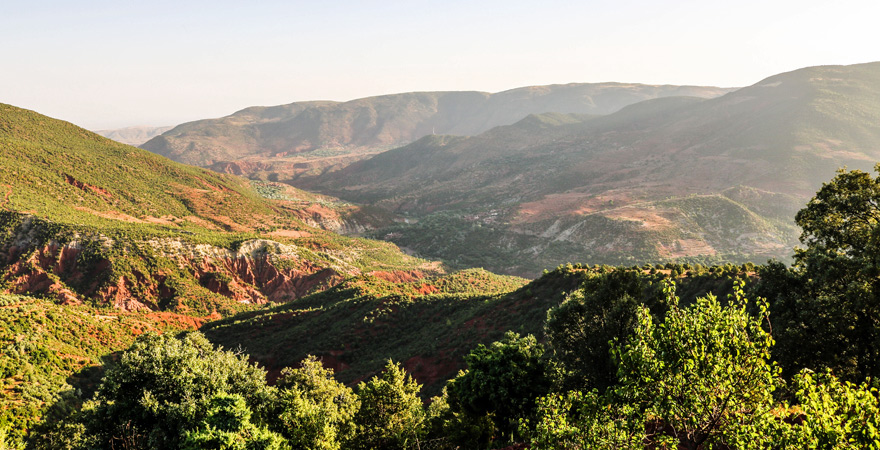 Attention while driving: The mountain pass is very curvy and this can be fatal to full or sensitive stomachs. Eat before the ride therefore rather easy and not too much, but in no way renounces the food. Then you survive the trip even without unscheduled stopovers.

One must have seen Essaouira – a picture-book city, which is also called "Pearl of the Atlantic". The influence of the Portuguese is here still in the truest sense of the word visible, the shutters and doors are kept in marine blue and thus form a contrast to the stark white facades. From Agadir, a day trip offers plenty of time to explore this vibrant, young and exciting city. Discover the harbor and Portuguese fort on a guided tour of the city and stroll through the Medina, a UNESCO World Heritage Site. In the afternoon you can go on your own and explore your personal favorite corners or haggle with the dealers. 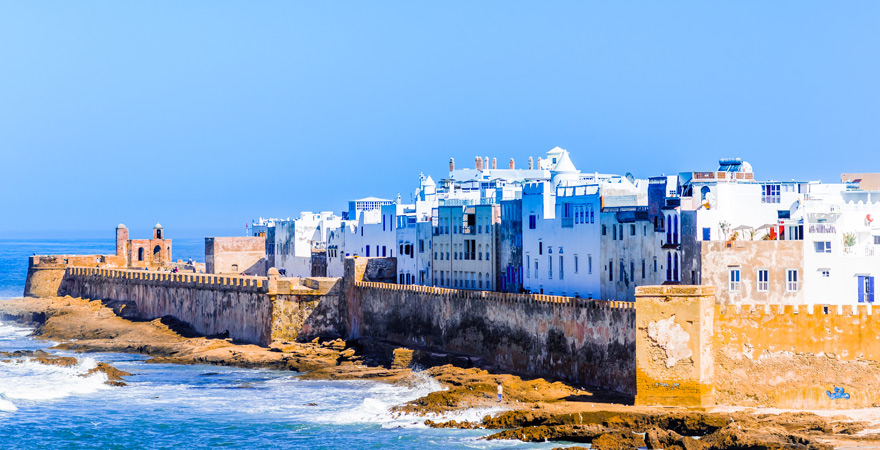 Marrakech itself already offers so many attractions, so you should plan for just a few days alone. Just think of the many beautiful gardens! But about four hours away by car there is an exciting place on the edge of the desert that you can not miss.

On this day trip from Marrakech you learn a lot about the original Morocco, its impressive nature and the Berber culture. For the long drive to Ouarzazate the motto is: "The way is already a program point". Do not forget to look out the window. You travel on the highest mountain pass in North Africa, the Tizi n'Tichka Pass, across the High Atlas Mountains. At 2,260 meters, this pass is really high, giving you a perfect view of the mountains and the traditional Berber villages. Be sure to get off at the stopover and take the opportunity for stunning landscape shots. 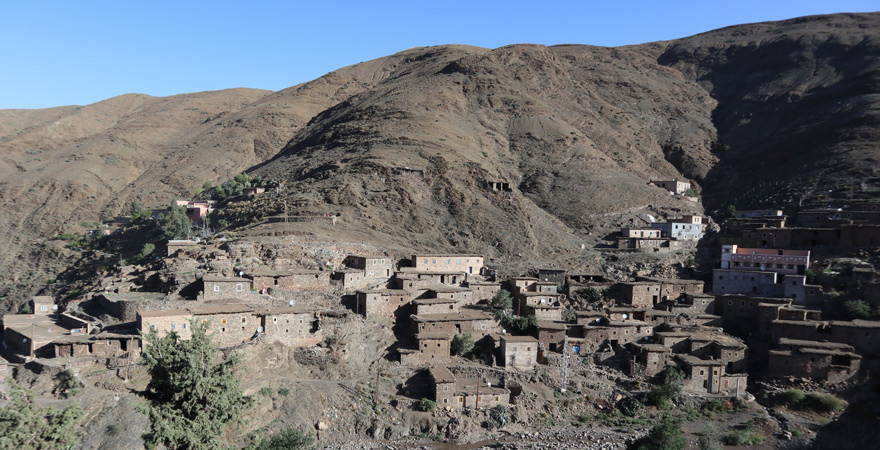 After the summit crossing, the Sahara lies at your feet. At the foot of the mountains is the ancient oasis city of Ait-Ben-Haddou, which lies at the foot of the ruins of an ancient kasbah. You've probably already seen her in the movie, because she served as a backdrop for "The Mummy" and "Gladiator", among others.

After lunch, you will have enough time to marvel at this fascinating UNESCO World Heritage Site with clay buildings. A climb through Ait-Ben-Haddou up to the hill to the Kasbah seems rather tedious at Moroccan temperatures, but it's well worth it. Although the old walls still contain some shops for the visitors, but no one lives in the city itself. The reason: As a UNESCO World Heritage Site, no electricity connection may be installed in the houses. Therefore, at some point, all residents moved to the other end of the riverbed, where they re-established themselves. Only three families still live in the old oasis city and use the empty buildings as stables for their livestock. 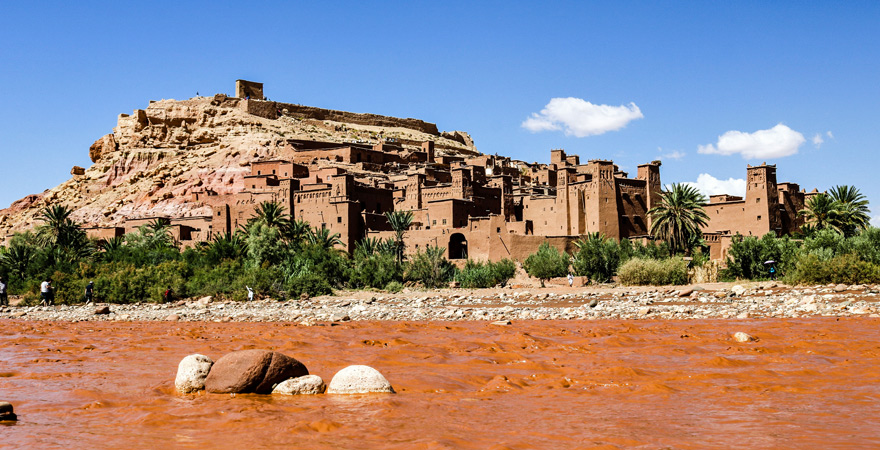 Also on the program: A visit to the Kasbahs Taourirt and Tifoultoute, which once served as a residence for a powerful ruling family.

Visiting the Hollywood of the desert

My colleague Simone and I took the opportunity to see "Atlas Studios", one of the two film studios in Ouarzazate. Above all, I'm a big serial fan and I've heard that some scenes from series and sandal movies are still there. I wanted to take a closer look. The first surprise was that there is a hotel on the grounds of the studios. We were curious and looked around the lobby. Here, too, there are movie props, posters and photos from films shot on the grounds in each corner. The perfect match for our guided tour – just click on Play:

But then we started: for 45 minutes we trudged after our guide and were fascinated by how lifelike the scenery worked in part. From the chariot to the jet plane to the palace from Ancient Egypt, everything was here. All the scenes consist of a wooden framework and the finer points were worked out with papier-mâché and finally painted, our guide tells us. The old scenes are mostly preserved because they could be used again in upcoming movies or series. Thanks to the Pappmasché changes are therefore always and easily possible. Some of the scenes were built together or directly adjoin one another. So it may be that one finds oneself first in a market in the Jerusalem at the time of Jesus and one step further already in the old Egypt. In this gallery I also brought you some impressions.

Once sitting on Cleopatra's throne – the feeling is truly unbeatable! If you want that too, you only need one ticket. Adults pay 50 dirhams (about 5 euros) for a guided tour, children from 6 to 12 years 40 dirhams. Children up to 5 years old enjoy free admission. Group tickets are a bit cheaper. If you are interested, then look at the reception in the hotel on the site – there you get the tickets directly.

You can book all presented excursions through your tour guide or meeting point on the spot – an overview of all possible Morocco excursions can be found here!